A Dry White With The Colonel

There may have been explosions in the distance and armed soldiers around him, but Luke Waters describes how Syria’s fighters try and retain some normality with a Middle Eastern feast.

It didn’t take long. Just seconds after piling out of a dilapidated twin-cab ute, the disconcerting sound of gun and mortar fire rang out. I was in Jobar on the eastern fringe of Damascus to embed with the Syrian Army. My objective – to gain some perspective on the seemingly unfathomable life on the frontline, in a story for Dateline. My guide for the day was Colonel Ahmed Zarqa – a portly, weatherworn man who commanded the Syrian soldiers in the precinct. The unit came under regular attack from Islamist insurgents – most recently Jeish el-Islam, or The Army Of Islam.

I first met the colonel in a dim bunker where he ate, slept and worked. The 50-year-old refused to wear anything to identify his high rank – and said he’d spent just two days in his own home over the past 14 months. He told me through a translator he now regards the fighters as his family. Within minutes of first meeting, the colonel removed his body armour and camouflage shirt to proudly reveal four bullet wounds he’d sustained over the five years of fighting. At the time I wondered how a man who lives, fights and sleeps literally on the front line of a brutal war managed to keep such a well-nourished – even bulky physique. 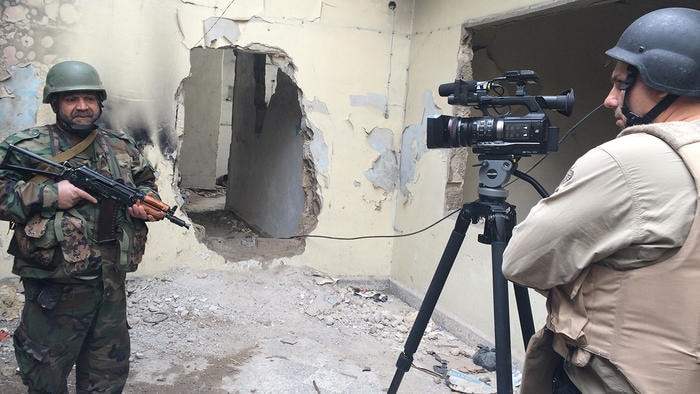 Although still a fraction ill-at-ease with the sporadic sound of explosions, I set off with Colonel Zarqa on a tour of the frontline. One by one he introduced me to soldiers and explained their role – often adding an anecdote.

One corporal lost a kidney fighting IS in Raqqa – the self-proclaimed capital of the terrorists’ caliphate. Despite being eligible for a medical discharge, the soldier returned to the battlefield as soon as he could – and still wanted to return to Raqqa. The translator explained that he had “unfinished business with Daesh” – the common name for IS in Syria. You sensed the colonel’s pride in his soldiers’ commitment to the cause.

Some say the number of opposition and rebel groups is in the hundreds, but I spoke with several soldiers during my time in Syria and it was pretty clear that IS scalps were the most highly prized. One Syrian soldier told me his tours to Raqqa to fight IS could last several months.

He explained that he didn’t much like the killing, but was doing it for his country. I’ll never forget his chilling expression though as he shared his battlefield statistics. “I have killed three Daesh and at least three Nusra,” he said. The latter is a reference to fighters from the Islamist militant group Jabhat al-Nusra. It’s hard to believe this frontline is only eight kilometres from central Damascus, where life appeared surprisingly normal. Shops were busy, cafes full and I even visited a couple of bars which could readily have been mistaken for a venue in any western city in peacetime.

While so much of the narrative around the Syrian crisis focuses on the refugees fleeing the country, eight million Syrians have been internally displaced. That means demand for services and aid well and truly outstrips supply. Aid agencies and even the government provide shelters, food and medical help but resourses are limited. An entire generation of Syrian children face the prospect of going uneducated or undereducated.

The children were never far from the minds of Colonel Zarqa and his fighters at Jobar. He said he won’t return to his home until “the smile returns to children in Syria”. He became noticeably more enthusiastic as our frontline foot tour progressed, but he made it clear that we had reached the end after revealing the complex and deadly tunnel system which existed beneath the rubble of Jobar.

Some days, most of the fighting took place underground and recently there had been several fatalities. As I packed my camera equipment in the twin-cab and prepared to leave I reflected on the lives of the soldiers, who have committed themselves to fight until the war or their lives end. It was a snapshot of life I would never forget, but it’s fair to say I wasn’t unhappy to be leaving the bizarre bombed-out world of the colonel and his cronies. I was about to take a seat when I heard my name called from the colonel’s bunker.

I returned to find the answer to my original question – the one regarding the colonel’s girth. In a country where untold numbers of men, women and children are wondering where their next meal will come from, the colonel obviously wanted to retain at least some sense of normality in this fraught situation. He and a couple of other officers were seated to a nine plate Middle Eastern meal of eggplant, salads, dips, potato and more. “The men can’t fight on an empty stomach,” the translator explained and then told me this type of meal was common.

They insisted I joined them, so with the occasional explosion in the distance, a Kalashnikov resting against the wall and surrounded by Syrian soldiers, I rolled my sleeves up to a Middle Eastern feast. Just when I thought this situation couldn’t get any weirder, the colonel reached beneath the table and produced a bottle of dry white wine and insisted we share a glass. How could I refuse?